Background Resources In the News 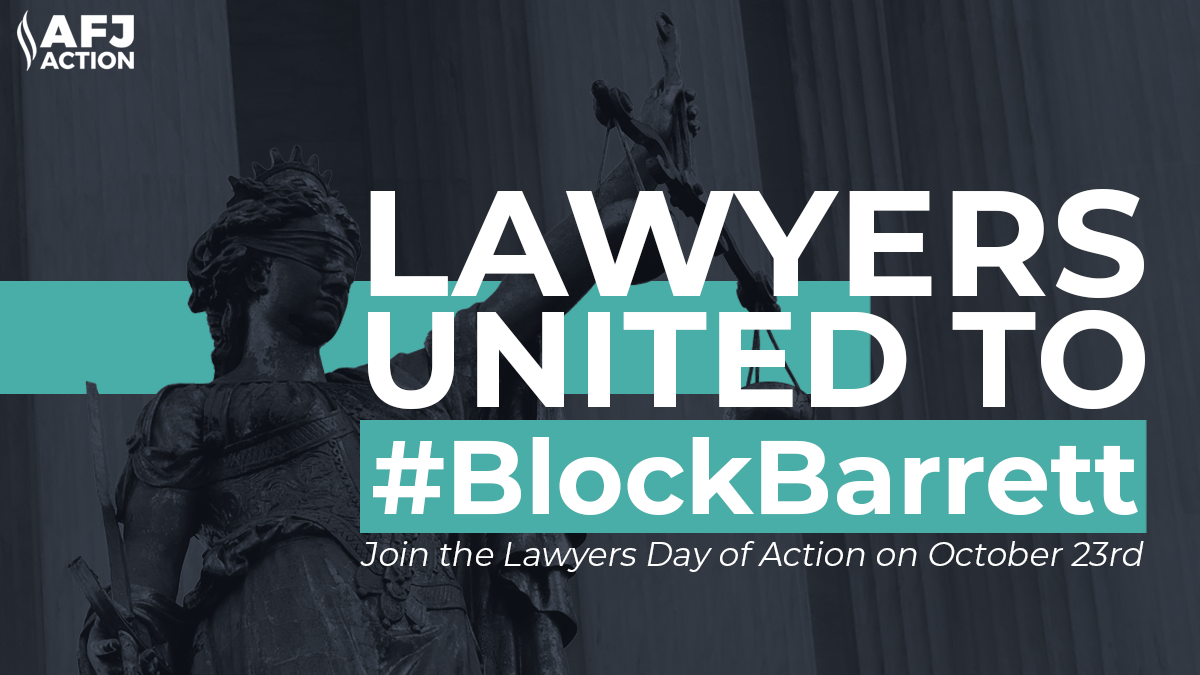 On Friday, October 23, with your help, AFJ Action is leading a Lawyers Day of Action alongside partners Lawyers for Good Government, Equal Justice Society, and lawyers across the country to #BlockBarrett and raise the legal community’s voice in opposition to Amy Coney Barrett.

We aren’t going to mince words: she poses a threat to all the protections Americans have long held dear.

Attorneys, law students, legal scholars and the full legal community are a unique voice in fighting to preserve the rule of law and core tenets of our democracy.

This Friday, October 23, join us for a Lawyers Day of Action to make it clear: The legal community calls on the Senate to #BlockBarrett.

Let’s make this the toughest vote they’ll ever take. Here’s what you can do:

And every day until the confirmation vote, call your senators and amplify our social media messages and utilize #BlockBarrett & #WeDissent.

We’re in this together—your support can save the Supreme Court.

Alliance for Justice Action Campaign Statement on the Hearings

And every day until the confirmation vote, call your senators and amplify our social media messages and utilize #BlockBarrett & #WeDissent.

My name is [name], and I’m a constituent from [city] calling to oppose Amy Coney Barrett. I’m also an attorney and I’ve joined thousands of my colleagues in opposing this nomination. She threatens the constitutional rights and rule of law that I, and all senators, have taken an oath to uphold. Her record shows that she will take away healthcare from millions including people with pre-existing conditions. She is committed to turning back the clock on reproductive rights, racial justice efforts, protections for workers, LGBTQ people, and more. She should not be given a lifetime seat on the bench. I urge Senator [X] to oppose Barrett’s nomination. Thank you.